It is horrible to imagine how a group of few angry people kills, harass, or rape someone with reason or without reason by taking law in hands. This dreadful thing is happening too frequently in our country. Mob lynching is a social disease whose doctor and the host is society itself. Mob lynching dates back to the 19th century. There used to be a lynch law in Virginia based on the name of a man ” Charles Lynch” who was associated with the killings and torture of British loyalists at the time of the American revolution. So it was the ‘west’ who coined the word ‘lynching’ which was mostly associated with killings/hanging of blacks outside law and authority.

The history of mob lynchings tells us that ethnic groups were the primary targets, while the perpetrators were mostly white. Today in the 21st century, mob killings are still happening around us. Some middle east countries are topping the table and India too is not far behind them in terms of numbers of lynchings. Before coming to the Indian perspective, it is necessary to understand what forces the otherwise ordinary and sometimes decent people to become a part of such heinous crimes.

The otherwise common man can be a culprit in lynching if he cannot control his emotions. Sometimes it is his religion, and sometimes it is a rumor about something which incites him. When many such people come together, there is a loss of individual identity, and the group starts considering it as one community. At such moments, group conscience trumps personal conscience.

The period of the 15th century to the 18th century was an era of ‘ witch hunt ‘ in Europe. At that time, Europeans used to believe that ‘someone is performing black magic on them. That ‘someone’ was a woman and were called witches. People thought that anything wrong happening around them was because of these ‘witches.’ So they used to bring such women in the middle of the town and tie them around a pole or tree and bit them with stones. Looking at such people, others around them used to copy them, and they too hit the women with stones until they die. This example was from the past. Such cruelty is being continued even today and is on the rise in India for a few years.

In India, caste prejudices, religious hatred, ethnicity, and rumors or myths are some of the reasons behind mob lynchings. These four criteria play an important role in understanding the Indian perspective of lynchings.

Untouchability and caste discrimination has been outlawed in India by the Untouchability (Offenses) Act,1955. But caste discrimination still exists in Indian society. Dalits are still harassed and lynched by the non-Dalits or the so-called Upper castes. To instill the same fear which existed before Independence in the minds of Dalits, some people try to send a message to the Dalit community that they should level themselves with the so-called upper castes. Lower castes and upper castes are here to stay until and unless caste is terminated. But unfortunately, this is not going to happen soon.

The Khairlanji Massacre from Maharashtra, which drew all the country’s attention, once again highlighted the Dalit community’s oppression. In the family, only one person remained alive as he was not in the house when eight upper caste people raped his daughter and wife while his two sons were chopped off brutally. No one from the village came to their rescue. Such lynchings will not stop until the idea of ‘purity’ and ‘pollution’ stays in the minds of people.

From years we all have heard that India is a tolerant country. But when religious lynchings like 1984,1993, 2002 and 2020 happen, we have to put a question mark to this statement. Religious killings and the blend of religion and state are going parallel to each other in India. People have started loving religion more than humans. Why do we forget that religion is for humans, humans are not for religion? Why we have forgotten ” Hindu-Muslim-Sikh-Isai, hum sab h Bhai Bhai” ? Where are we heading? What will we achieve by cultivating hate and bigotry? Religious politics is trumping over humanity. No religion asks us to hate another’s religion. But we appropriate religion according to our needs.

Religion has become a political tool to control masses and to build a voter base. In India, many right-wing politicians use a gimmick to enrage Hindus by saying that ” Muslims will outnumber you.” Recently, slogans were raised by a union minister before the Delhi riots asking people to shoot the traitors. A man carrying a gun was soon caught near shaheen bagh where protests were going on against the citizenship amendment bill, and most of the protesters were Muslims. But soon, the man was released and got a warm welcome from people. Another such incident happened when a union minister garlanded the culprits of mob lynching who were convicted in Tabrez Ansari lynching case . Tabrez Ansari was lynched in Jharkhand on suspicion of theft and forced to chant Jai Shriram.

This encouragement of hate and religious bigotry will tear the secular fabric of India and will/may lead to mass hysteria, as I wrote earlier.

Tribal communities all over India who often come to urban areas for daily earning are rumored as child-lifters or Xopadhoras (as called in Assam). In India, we all are told in our childhood “some danger woman/man will come and will take you with her in her bag if you do not sleep” and we used to sleep due to fear of being taken by that dangerous woman/man. Unintentionally we all have an image that people who are mostly dark, dirty, and have a dangerous face are not good human beings. In 2018, two people were lynched to death in Assam as the rumor spread widely on WhatsApp that they were child-lifters. The tea garden communities in Assam, Dalits, and tribals all over India are the most vulnerable of all. 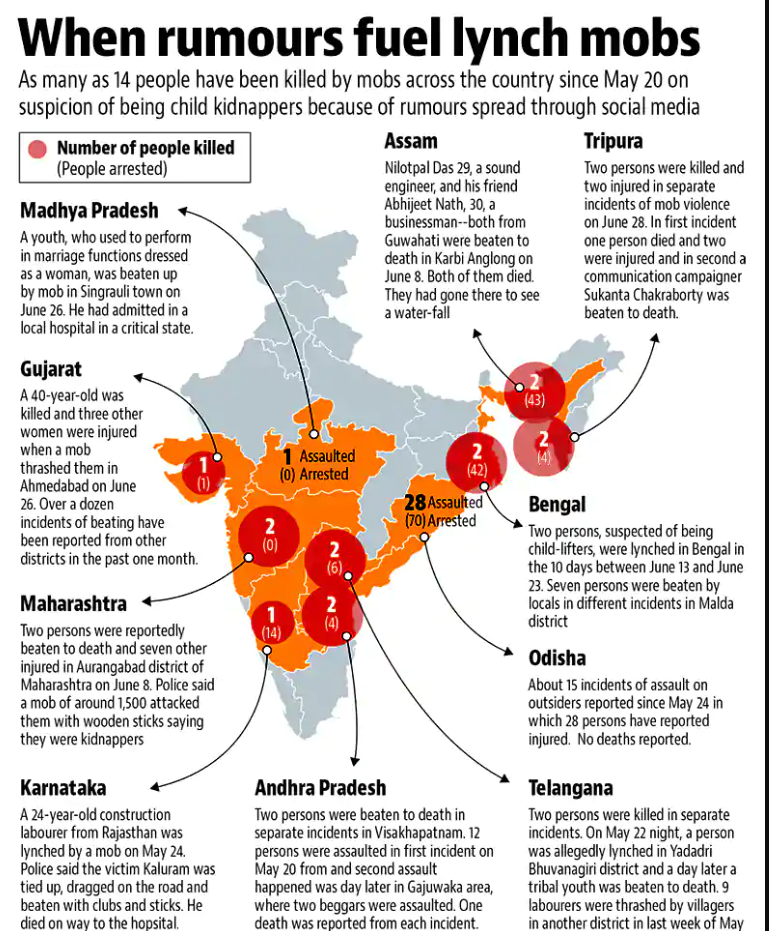 Assamese do not want outsiders to settle there. Many lynchings in Assam are related to this hate between the aliens and non-aliens. Assamese do not want to be a minority, so they hate it when any Bengali is settled there. Assam was burning due to the same issue when there were protests all over India on CAA.

Recently in Maharashtra’s Palghar 3 Hindu saints were brutally lynched on suspicion of theft. The crowd was gathered all around them as the WhatsApp message went viral. Shamefully, a police person who was suspended later was also involved in that lynching. While all this was happening, Indian media was projecting the murders as ‘ Hindus killed by Muslims’ and tried hard to make it a communal issue. The limit was that the Home minister of the state gave the list of all culprits on twitter and WhatsApp. Surprisingly, many culprits were Hindus.

Mob lynching of the vulnerable population has domestic as well as international consequences. USCIRF (US Commission on International Religious Freedom) has condemned Delhi violence (2020) as well as the arrest of a pregnant woman journalist and designated India as a country of particular concern for its systematic, ongoing, egregious violations of religious freedom during 2019 and 2020. This is the first time since 2004 when India became a country of special concern. New Delhi has called out the report as bias. It is important to know that India is a signatory to the UN Convention on Human Rights, which also includes religious freedom. Another international organization OIC (Organisation of Islamic Countries), has also condemned the targeting of Muslims in India.

India should now accept that mob lynching needs a stringent and permanent solution not only in the form of clearly stated law, but also in the context of the social and economic position of people. Government and the ruling party must sideline itself from extremist organizations and must ensure that radical religious extreme ideas should not nurture in the minds of people, especially youth, and the people too should not fall for such ideas. The government must try to regain the trust of minority and vulnerable populations by adopting a zero tolerance policy for all kinds of lynchings.

There is light at the end of the tunnel.

[responsivevoice_button voice=”Hindi Male” buttontext=”Let’s listen to this Theel”] On the twenty-sixth day of January in 1950, India, that is Bharat, became a republic. It was on this day, we, the people of India, adopted our constitution. At that time, the world laughed at us for adopting the path of democratic-republic as a way forward for…

The idea of a youth organisation being half as inclusive as they claim to be would be one of the most absurd and far from reality urban myths I have had the misfortune of hearing about.

Pan-Africanism is an international movement that intends to encourage and build up bonds of harmony and solidarity among all indigenous and the diaspora of ethnic groups solely of African descent. A movement as old as the 19th century to date has one sole purpose; A purpose as meticulous as representing the accumulation of the ancient,…

The idea of the bills is to liberalize farm markets hoping it will make the system more efficient and allow for better price realizations.