Analysis of Regional Land Use And Land Cover

India being the seventh-largest country and second highest populated country (1.5 billion people) that has various resources like forests, rivers, wetlands, mineral deposits, urban industries and also has a large amount of agriculture production for the population. With the ever-increasing population, the pressure on resources has a serious impact on per capita land availability. India has many natural resources for food, shelter and the environment which is also growing enormously. Changes in urban landscapes and their hinterland have also resulted in environmental degradation. The rapid changes in land use/ land cover are developing the nations and also the increase in urban sprawl, degradation of land, shifting of agriculture farming to marine farming. These changes have affected the land use/ land cover on a global environment which has occurred due to various human activities. Therefore, it is essential for monitoring the changes in land use/ land cover.

Remote sensing and Geographical Information System (GIS) are two powerful means for monitoring the change in land use and land cover and also studies and monitors the dynamics of natural resources and environmental management. Land use/land cover information is mainly used for planning and utilization of natural resources. Land use mapping has become one of the important applications of remote sensing.

The aim of the study is to map the land use/ land cover of an urban area for two years in order to find the changes that have taken place. With the change in time, there are changes in land use and land cover which provide valuable insight into the factors influencing the changes. To understand it is essential to understand the magnitude and direction of these changes both spatially and temporally changes in the regional environment.

Muzaffarnagar being the upcoming urban area and as part of NCR has witnessed remarkable growth and development in urban activities which resulted in a change in a land over time. To evaluate and detect the change that has occurred and the land that has consumed, it is, therefore, necessary to carry out the study to understand the growth of the Muzaffarnagar to avoid the problems associated with urban expansion. The main objectives of the study are as follows:

Muzaffarnagar is located in the northern part of Uttar Pradesh. It is a part of Saharanpur. It is also a part of the national capital region. It is situated on the DOAB of the river Ganges and Jamuna. Muzaffarnagar has a sub-tropical climate characterized by hot summers and cooler winters. Summers last from April to late June which is extremely hot. Monsoons start from June which lasts up to mid of September. Winters are dry which starts from late October lasts up to middle March.

Considering the topography of Muzaffarnagar, the land use and land cover categories were broadly classified into eight classes which were further classified into different classes that had third level classes. Using different software’s, the satellite data of the two years (2012 and 2015) were interpreted by digitization method where land use and land cover features were extracted. The vector data which was interpreted were overlaid on one another for identification of the change and the drivers that caused the change. The areas which showed difference within the years in land use and land cover were designated as “Change” whereas; the others were designated as “No Change”. All the land use and land cover classes of both years were compared in a tabular matrix. The errors in the change were reanalyzed and corrected. The remaining categories were compared of both time periods and the reason was therefore assumed. 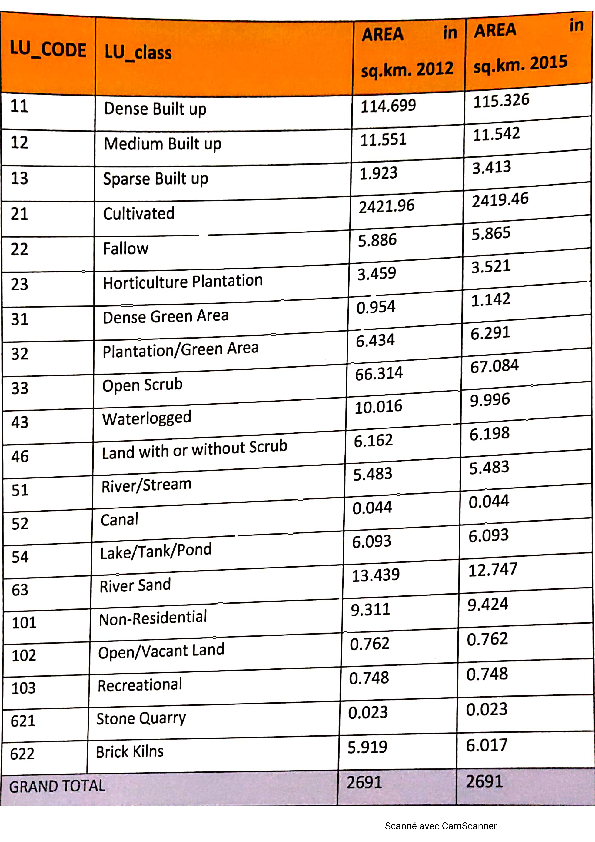 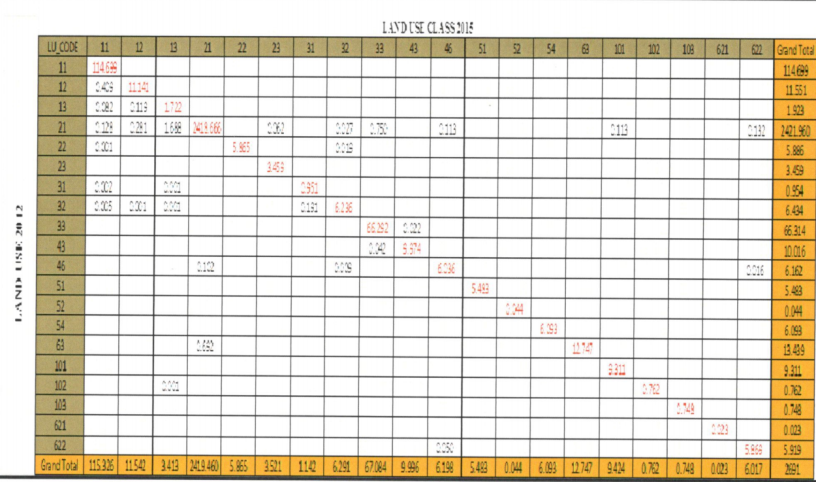 The results derived from the study are as follows: 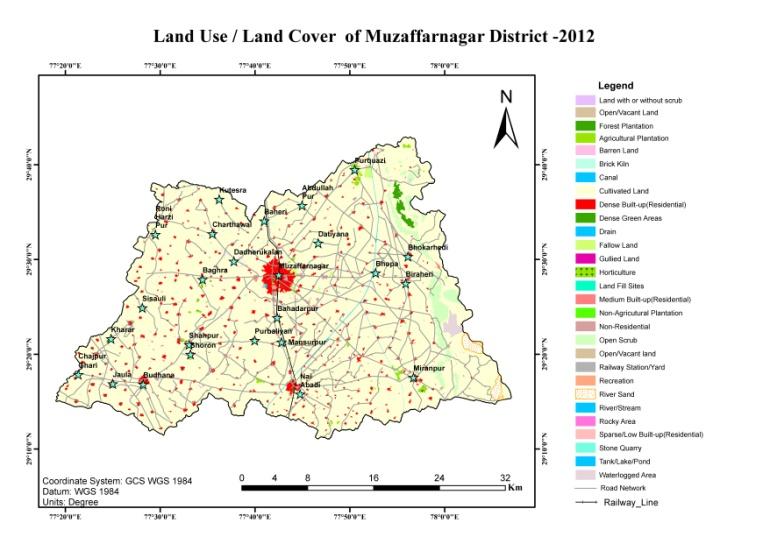 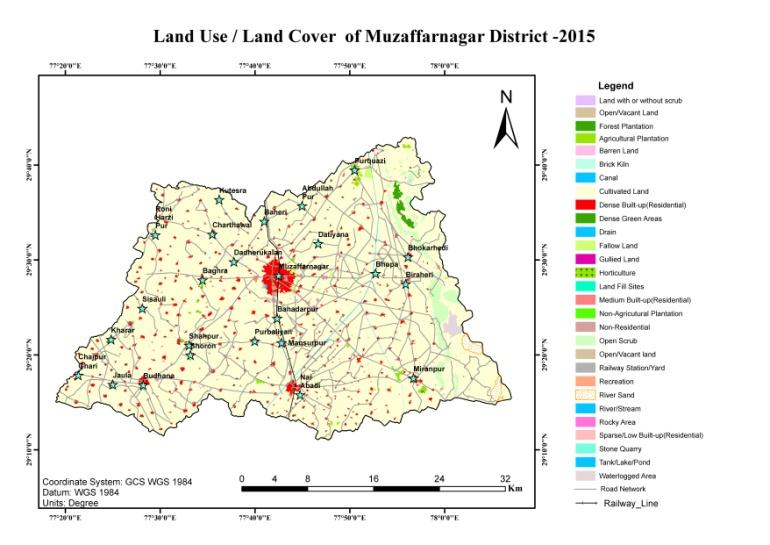 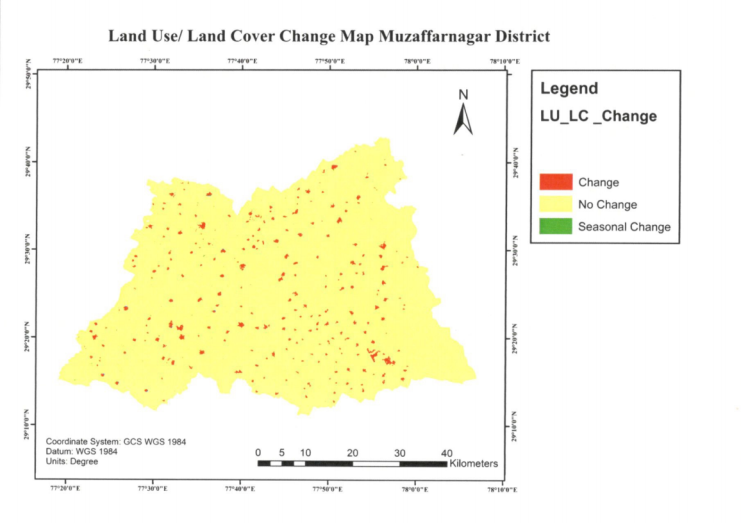 The study demonstrates the utilization and ability of remote sensing and GIS techniques in capturing spatial-temporal data. Analyzing the changes over the period of time will help in understanding the nature and growth of this phenomenon and thereby visualizing the likely scenarios of future changes. An attempt was made to capture all the land use and land cover categories i.e. built up, agriculture, wasteland, water bodies and admin boundaries. Hence, the study investigated the changes that took place over time the period and drivers that affected the change. The land use and land cover maps of Muzzaffarnagar of 2012 and 2015. The study highlights the urban sprawl of the district. The changes that were observed were mainly visual interpretation without field data validation. Further, with the help of field data, attribute information and long time temporal data, we can be able to predict the future changes scenario and settlement growth.

3. Zubair and Xiubin, L, Change Detection in Land use Land cover using remote sensing and GIS, A review of the international researches on land use/ land covers change, (1996).

Get your writings published!

Most of our writings are contributed by our readers. You can write too. Check out our writing guidelines.

UAPA: Protection to India’s Sovereignty or a Way to Curb Dissent?

CAA: The final nail in the ‘Liberal’ coffin?

Ilaiyaraaja: The King of Music, is a Global Phenomenon

THE RETURN OF GAIA IN OUR TIMES

Pressure Groups in the USA and UK – A comparative study

Veerabrahmendra Swamy: A saint who predicted the doomsday

ABOUT US
The ArmChair Journal is for individuals seeking high spirited meaning in life. Our approach to writing and understanding is through Theels. Theels are to hold both thoughts and feelings acting together in understanding and perceiving the world.
Contact us: publish@armchairjournal.com
FOLLOW US
© Copyright © 2022 The ArmChair Journal
Loading Comments...